On November 12, 1997 my son Joey was just a mere 7 days old. Seems like forever ago. Seems like just yesterday.

In his baby sketch book on this day I wrote down some words. They weren’t intended to be formed into a poem, just some thoughts on paper reflecting what was going on at the time. 15 years later, I thought I’d share them with you.

I also drew a quick sketch to show Linda the difference between a shotgun and a rifle. (These three thoughts in the sketch book are unrelated… but represent a moment in time early on in Joey’s life.)

People do not operate
on the same logical level.
Things we think as rational or irrational
may be perfectly normal,
or even bizarre by others.

We must know that we will
never be able to change
one’s rational personality.

The sooner we learn this,
the happier life will be,
for we can try to understand
than to change. 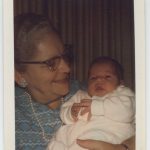